Bindi and Bruchnal – the Westlife problem…

Here is the thing: when people think about being a cat-sitting, they tend to think of me hanging out in people’s home with a cat on lap. Well, it is part of it. In fact, I dare say it is only HALF of it, might even be less than half some days. What people fail to realise is, the ‘getting from point A to point B’ part make up a big part of my day.

If you live in Dublin like I do, where transport is a nightmare, then you know I spend A LOT of time on the road.

Brunchnal and Bindi lives in Druncondra area in Dublin. If you know Dublin, you will know that this neighbourhood is not far from one of the nation’s stadium – the Croke Park.

Brunchnal is a friendly ginger boy. When his human signed up to use my service at first, he was the only cat in the house.

A few months after, Bindi, a tuxedo girl with determined personality joined the family.

They are great friends together. It’s fun to watch them playing together. Plus, it’s pretty straightforward to take care of them, so it’s always a joy to be booked to see them.

Their humans prefer to have them looked after in the evening. Since their neighbourhood is only next to mine, I usually book them in as the last job of the day before heading home.

What I am trying to tell you is – it is an easy-peasy job that round up a cat sitting day nicely!

The exception is on 23 June 2012, the day that shall remain in the “History Book of Boy Bands”, when Westlife had their last concert EVER before breaking up. It took me 4 hours to finish the job for Bindi and Bruchnal!

And I just HAD to leave Brunchnal and Bindi at the EXACT SAME TIME when the concert is over. If I would have known the trouble I had to go through to go home that day, I would have adjust my route so that I wouldn’t run into the crowd that comes out from the concert. Unfortunately, I don’t follow celebrity news and whatnot.

A picture is better than a thousand word. This is Drumcondra after midnight!

Just to prove that this real-life incident did happen, look at the news report on the matter. For good measure, I toss in the event info just for laugh as well.

Thanks to these four men, I was stuck in traffic for three hours.

Technically speaking, I wasn’t stuck in traffic as I couldn’t even get into the traffic. I was standing hopelessly on the side of the road! It took me more than an hour to get on a Night Bus so that I could eventually be part of the traffic!

You might ask, ‘why don’t you just take a taxi?’ Well, my friend, have you been in in the crowd with West Life fans? I was in the crowd with thousands of people, with 99.99% being female, they are all high on excitement to be part of the History of the Book of Boy Band, screaming, jumping all over the place. And then occasionally you will run into one sulking male (possibly father, husband, boyfriend, etc) tagging along like zombie and you can see their thought bubbles said ‘get me out of here!’

So no, there is no way I could fight for a taxi over these people and plus there were only a few taxi scattering around.

How did I go home at the end? Oh well, it’s part of the ‘trick of the trade’ in my business to know about bus route. When I saw a Bus N33 going up Santry, I jumped on it. I knew this will take me up the road to Santry where the crowd will disperse. I would have a better chance to get a taxi from Santry back down to Clontarf.

And that’s what I did. I managed to get on a taxi in Santry at 1am.

It took me 3 hours to get home for a distance that normally take 15 minutes.

Oh well, at least I got to live to tell my grandchildren one day.

‘Your grandma was in the crowd at the last EVER West Life concert!’ 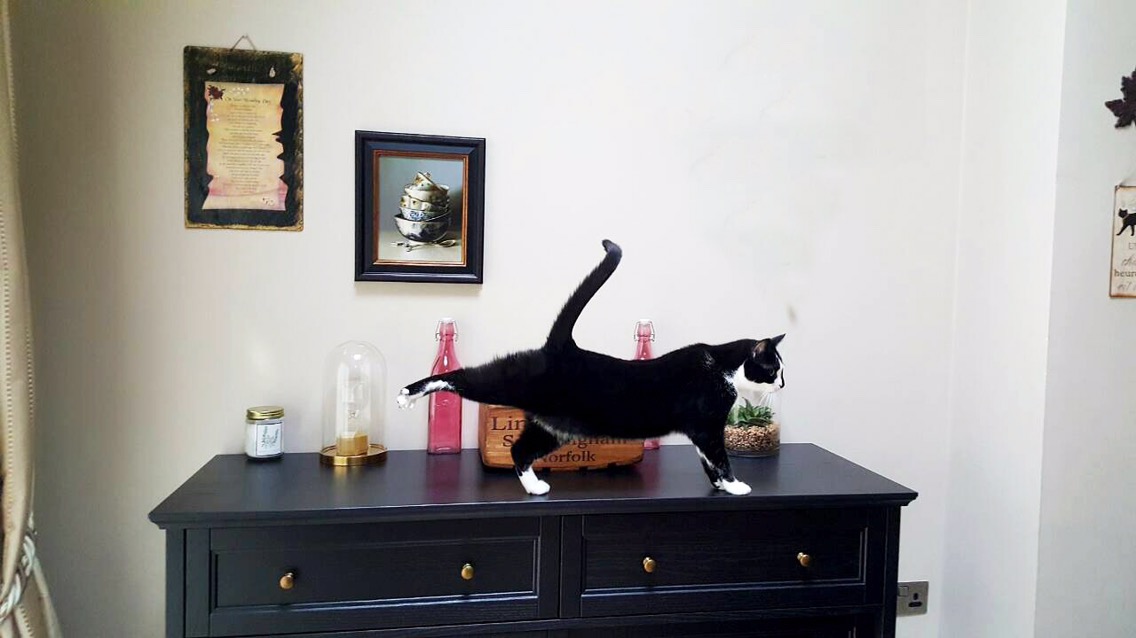 Got this random picture at a job of one of our cat-stomers - Guinness. Though you guys would appreciate it 🙂 Have a...

END_OF_DOCUMENT_TOKEN_TO_BE_REPLACED

I am a food police – Luna, Picco, Elphine

One of the things I love about being a cat sitter is that I get to meet other cat lovers. And many of them have great...